Moroccan cuisine is full of vegetables. Every meal was served with veggies of all colors. There were several salads served almost everywhere and this Simple Moroccan Salad with Argan Oil Salad Dressing is one of them. Green beans, cucumbers, tomatoes, and onions tossed with a simple lemon vinaigrette. 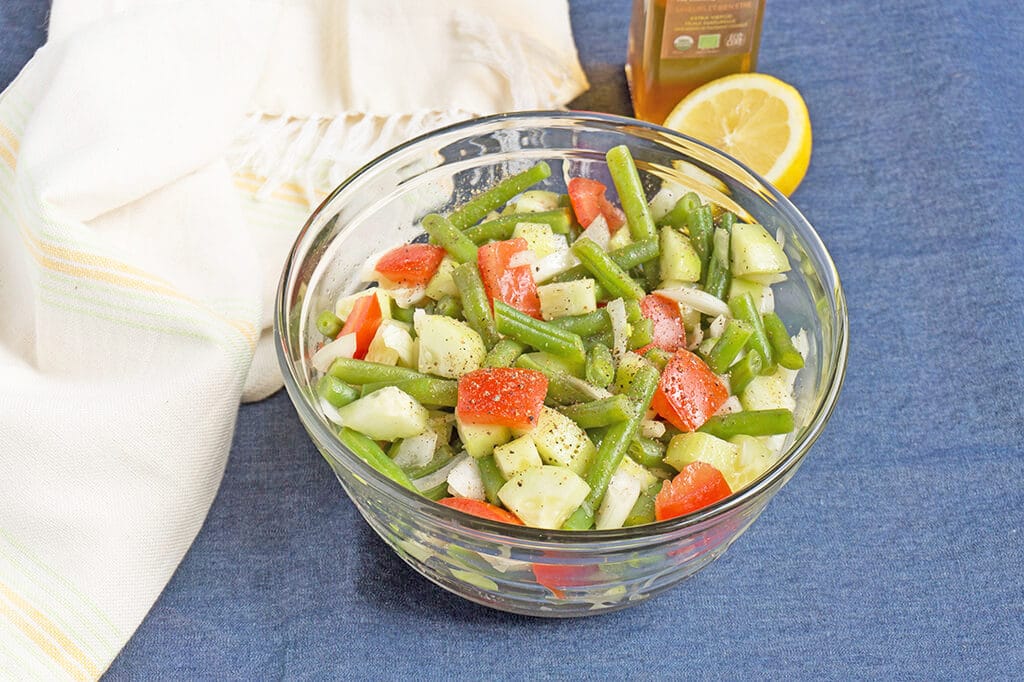 I was lucky enough to make this dish alongside a Moroccan chef at Khadija’s Kuzina in Essaouira. 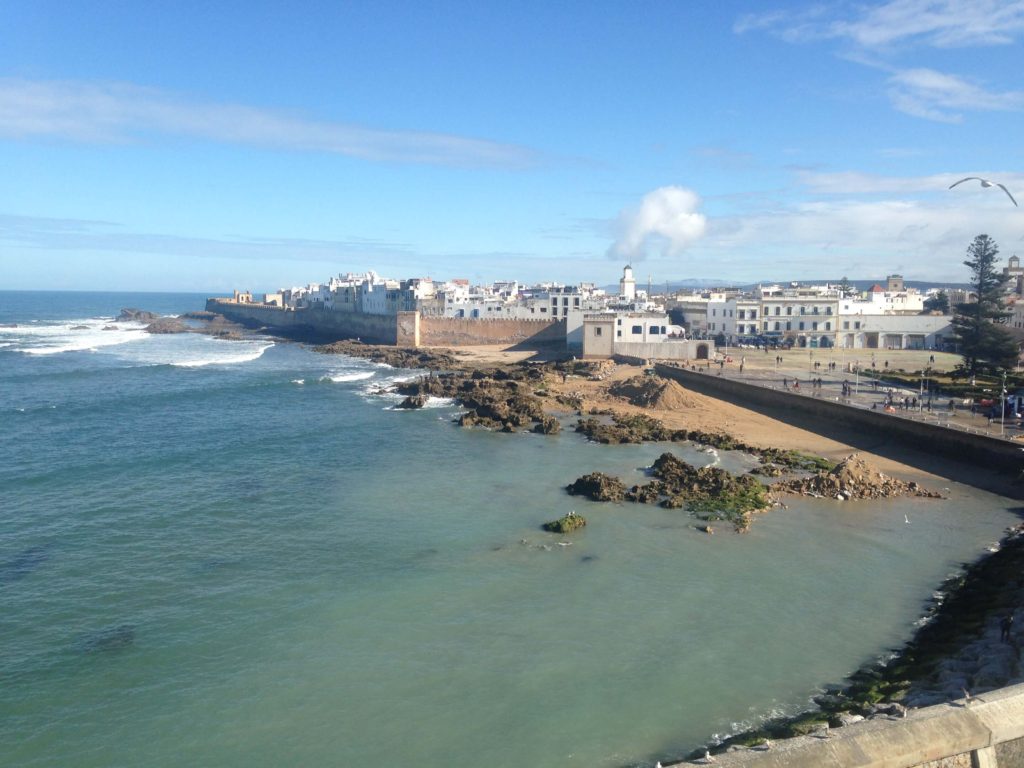 Essaouira is a quaint, seaside town about halfway down Morocco’s coastline. It has a laid back, hippie vibe and it’s full of musicians and live music every night. The town’s original name is Mogador in the Amazir (Berber) language and many locals still refer to it as Mogador. 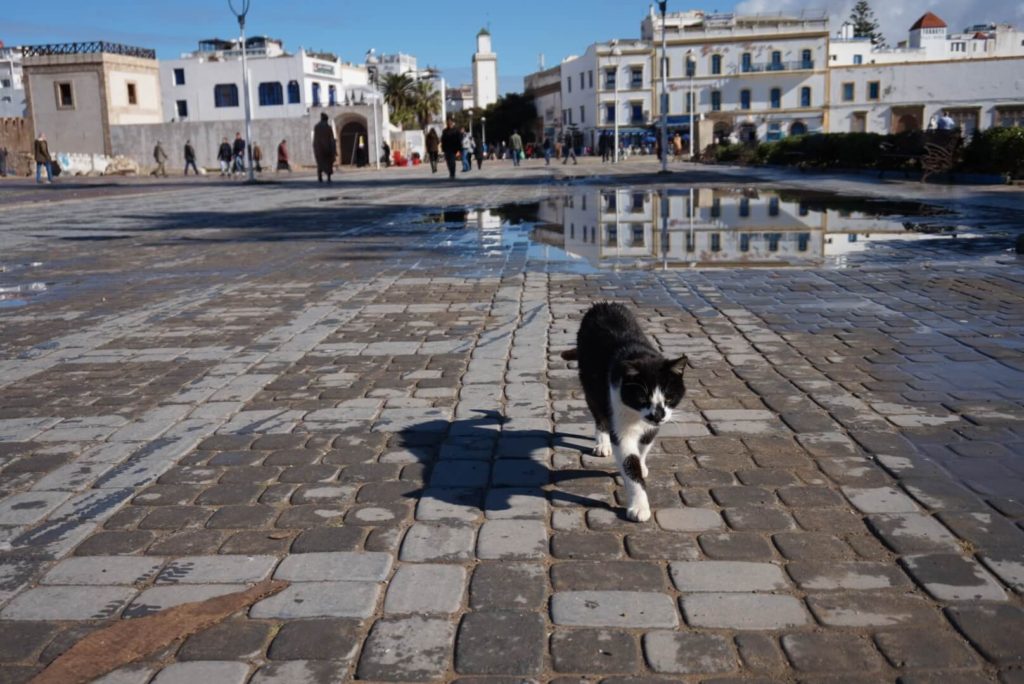 We spent one morning walking out on the fishing pier when all the boats came in with crates of fish. It was a chaotic bustle of fisherman selling, people purchasing and of course, a large lot of dogs and cats running about. 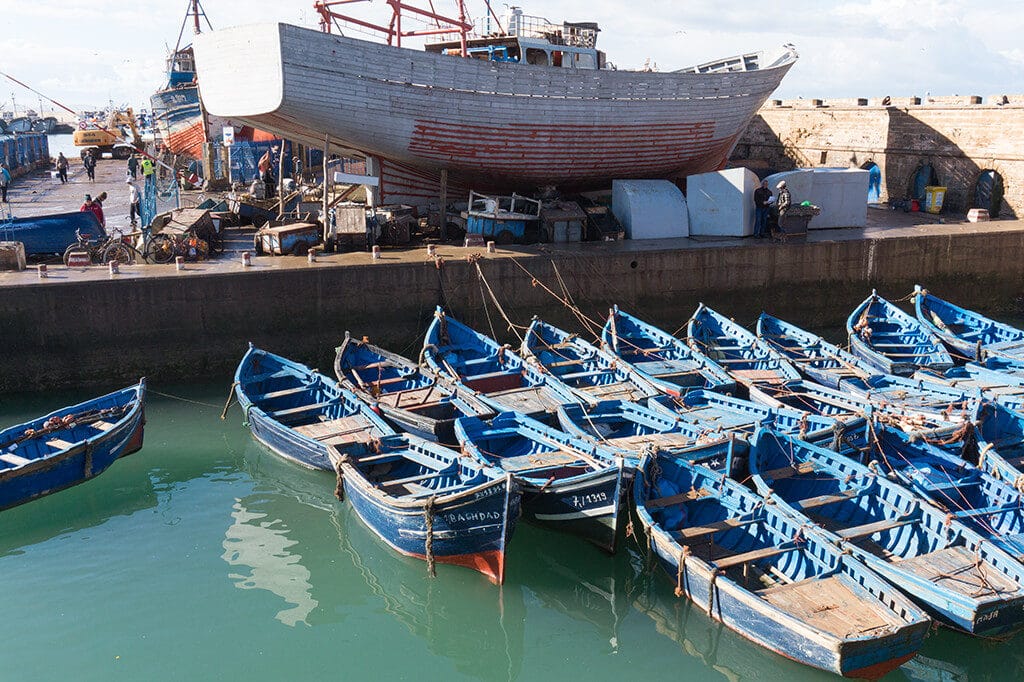 There are fresh fish stalls right next to the pier where you can choose what you’d like to eat for lunch, grab a seat and have it cooked right there for you!

One of our favorite meals on the entire trip was in Essaouira at Caravane Cafe. They started us off with a little vegetable sushi roll, we shared a plate for dinner – monkfish which I had never had before and loved. We wanted to stay as long as we could because of the amazing Egyptian band that was playing…so we ordered a molten caramel cake with ice cream. At the end of our meal they surprised us with a small glass of fresh ginger rum. I wish I had photos – it was just too dark in there!

Other restaurants I’d recommend if you are in Essaouira – Megaloft, Loft and Umia. All great choices. 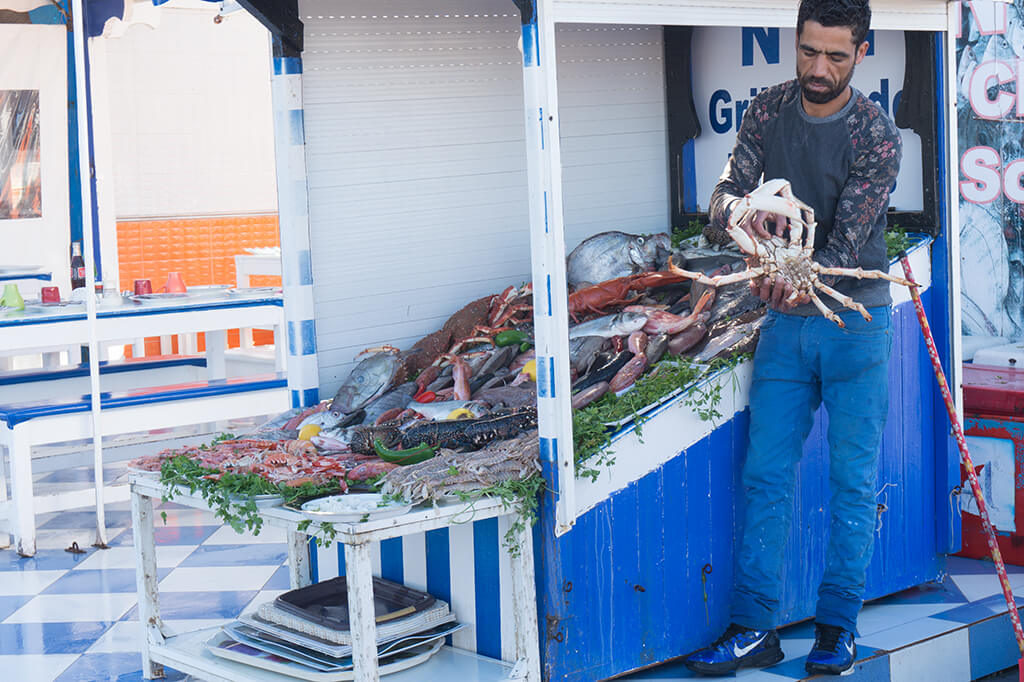 We definitely enjoyed walking along the ocean – there were horses and camels just waiting for you to hire them for a ride. At the very end of the beach sits the Jimi Hendrix house, where the musician spent a good amount of time just hanging out in this hippie town. He wrote the song Castles Made of Sand while visiting. 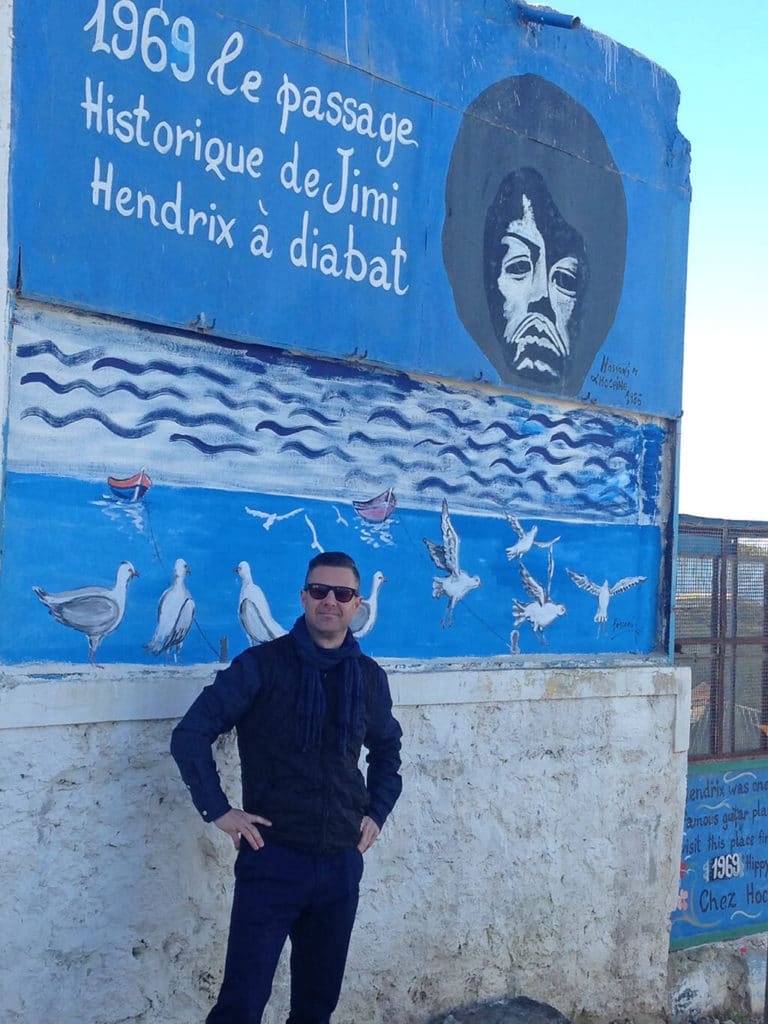 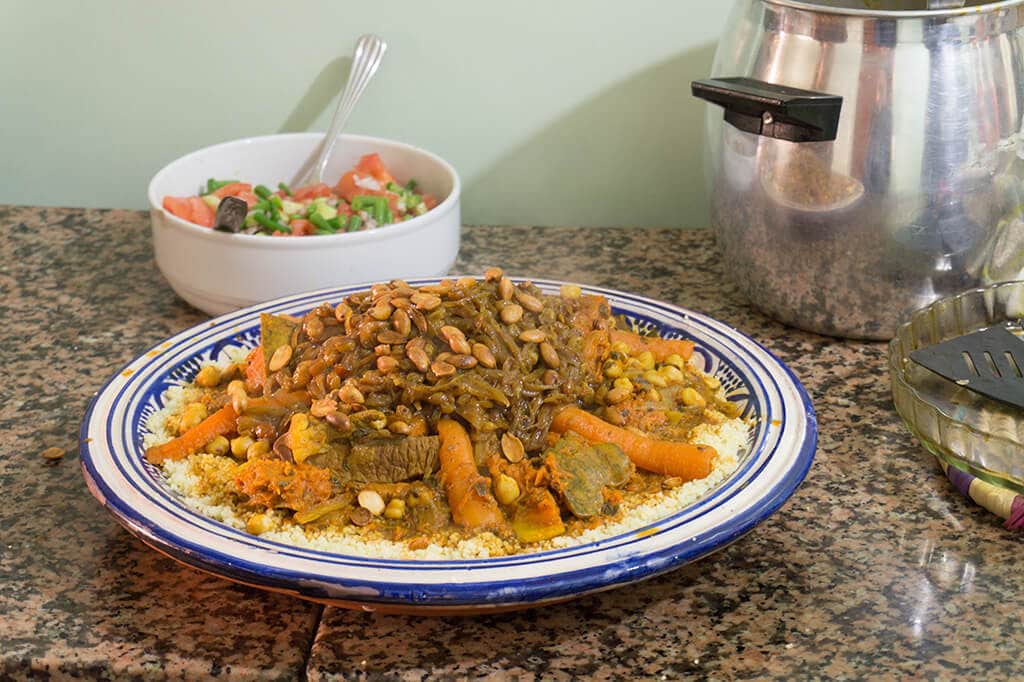 One of the highlights of our time in Essaouira was the Moroccan cooking class we took with Khadija. We made Couscous Tfaya, Chicken Pastilla and of course, a Simple Moroccan Salad. Here we are in action in Khadija’s Kuzina! 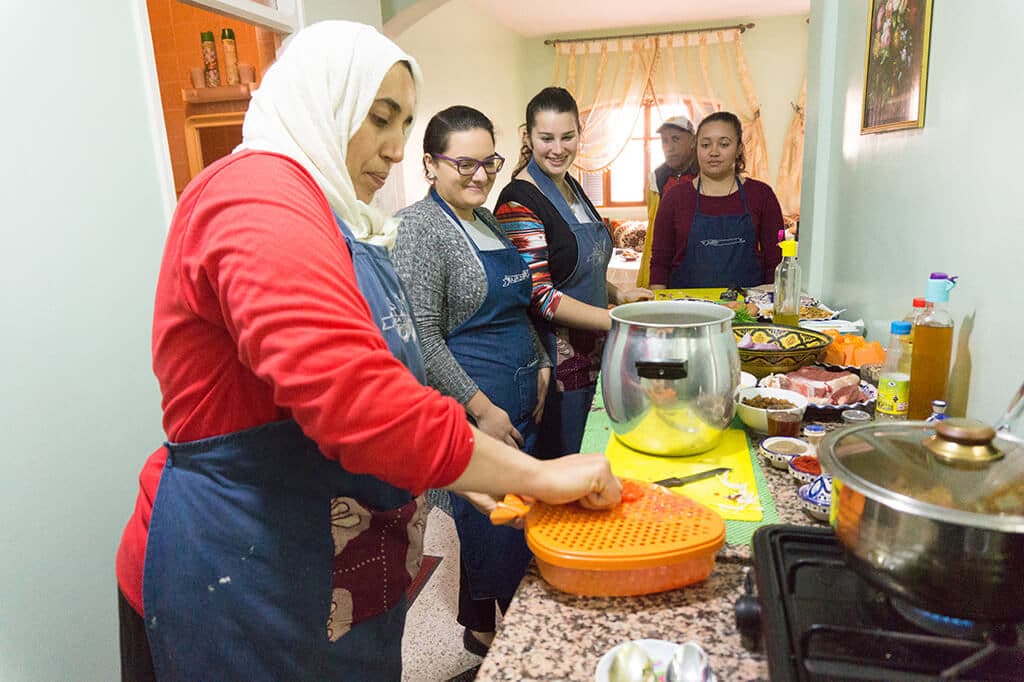 We used a special couscous pot to steam it 3 times. Feeling the texture in between each steam, adding a little olive oil on the final steam – what a fun process! Here Khadija is giving the couscous a final feel. 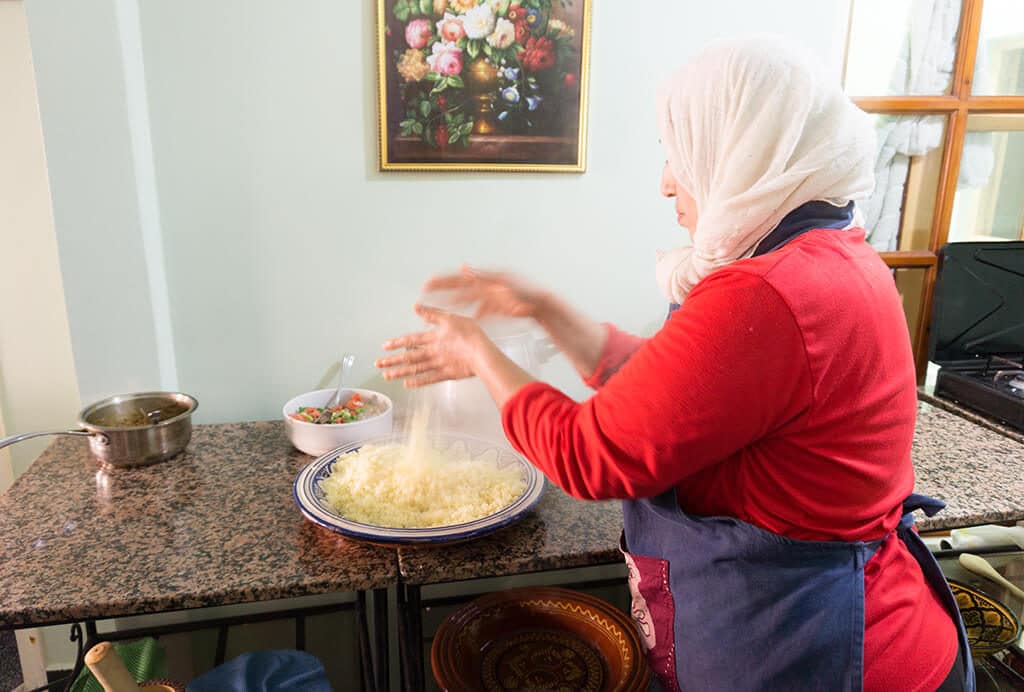 The other dish we made was Chicken Pastilla – probably the one of the most unique flavors I tasted while in Morocco. The best I had was in Fez (the foodie capital of Morocco). Pastilla is like a sweet chicken pie! Strange to imagine, but it was fabulous!! It has a layer of ground toasted almonds and the top (which is a cover of phyllo-like dough) is dusted with powdered sugar and cinnamon. Here we are filling and wrapping the pastilla. 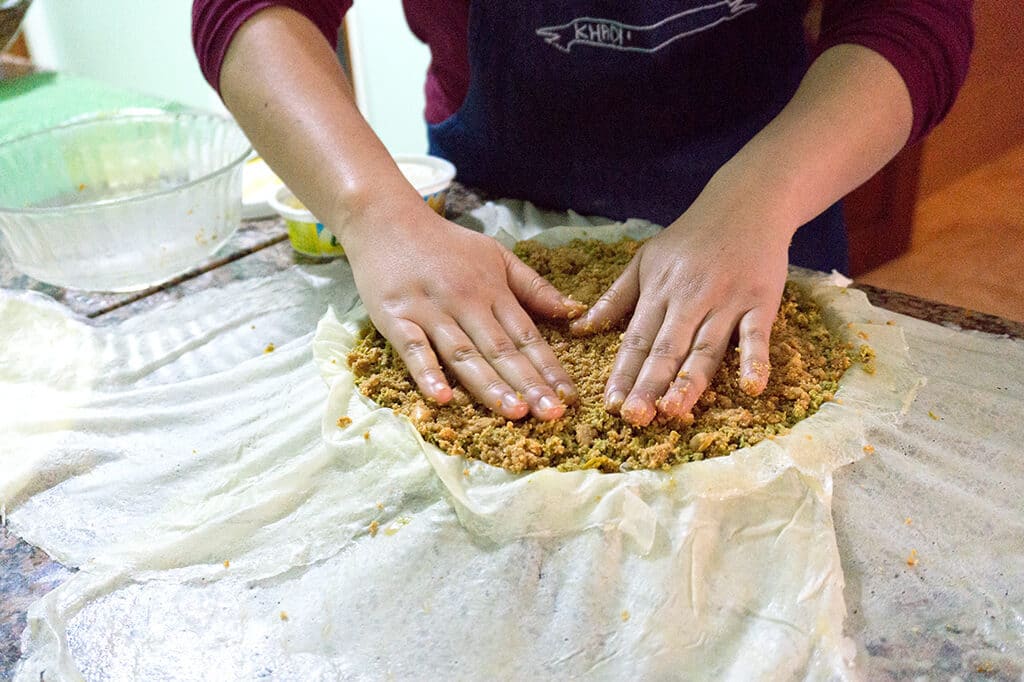 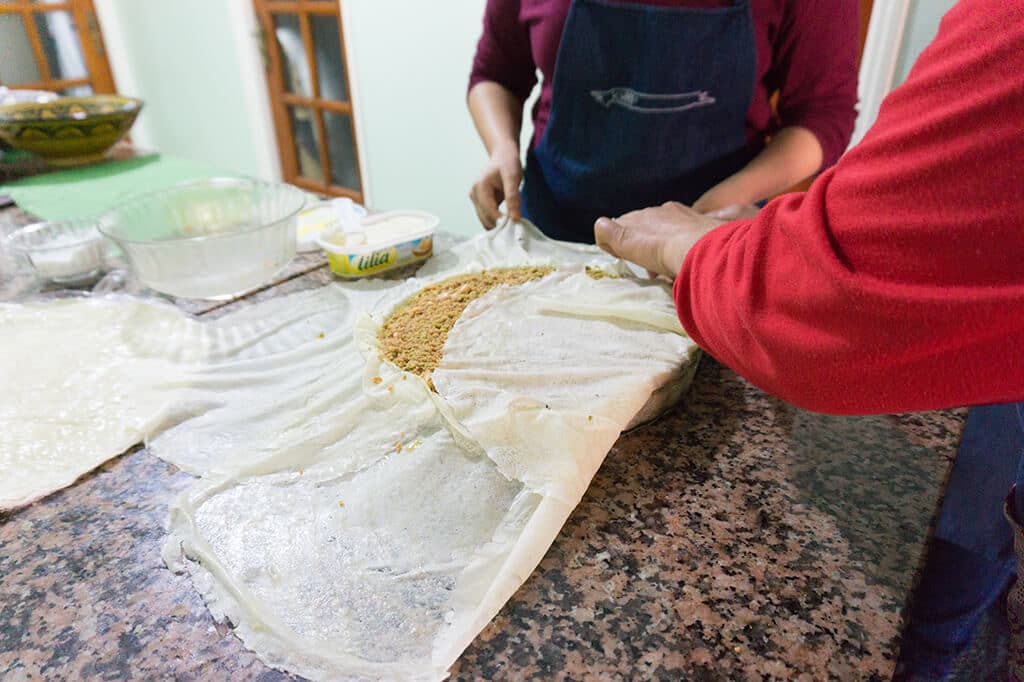 Our final product before chowing down!! Note the fancy crisscross pattern in cinnamon-sugar that we dusted our chicken pastilla with! 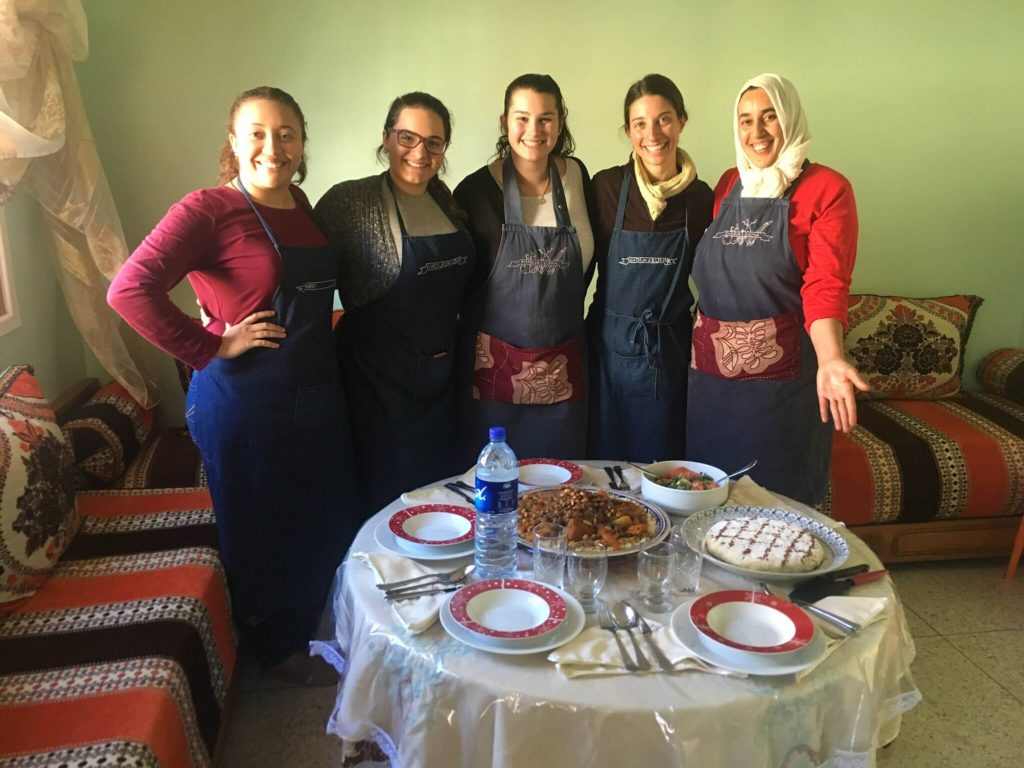 Khadija was so kind to us and took us on a special adventure after our cooking class to her local spice shop. We wanted to get out of the tourist traps and find a shop where fresh whole spices are ground on premise.

We bought fresh cinnamon, turmeric, mace, paprika, Ras al Hanout. Oh and saffron threads, so much for just a few dollars! We probably drove the spice shop workers bonkers with our indecision, but it was so much fun and we left the shop in a cloud of smoke from all the fresh spices flying through the air! 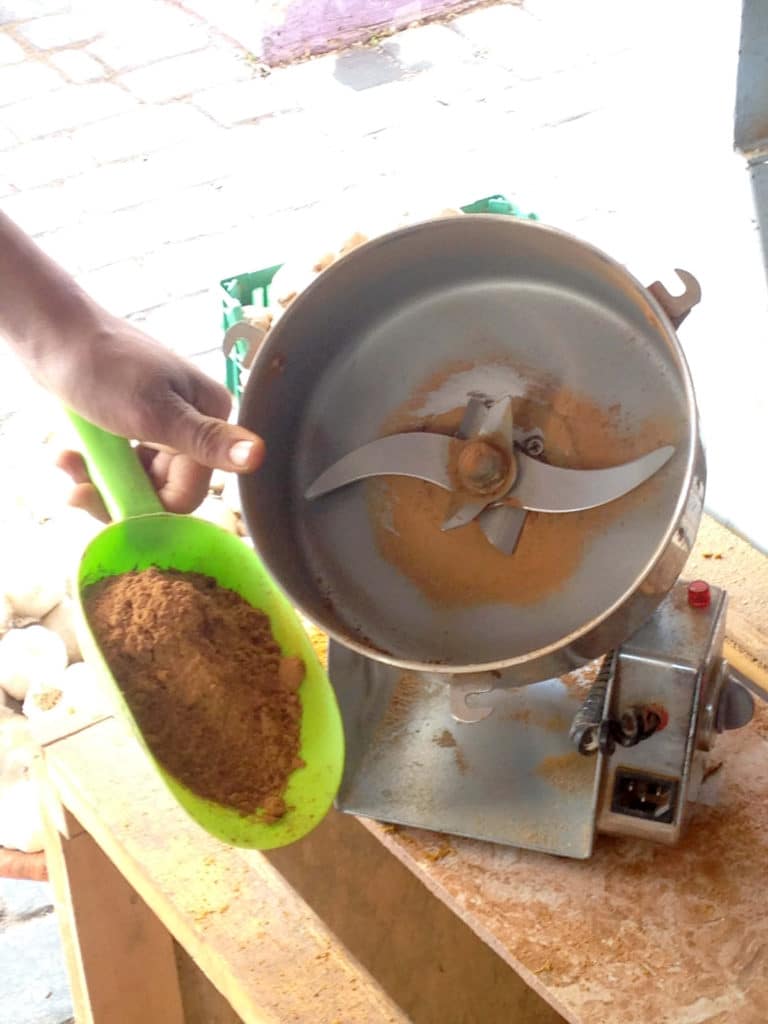 Morocco is known for its Argan oil production and it’s the only place in the world where Argan trees grow and produce. Turkey made an attempt to grow Argan trees, but the trees didn’t produce any fruit. 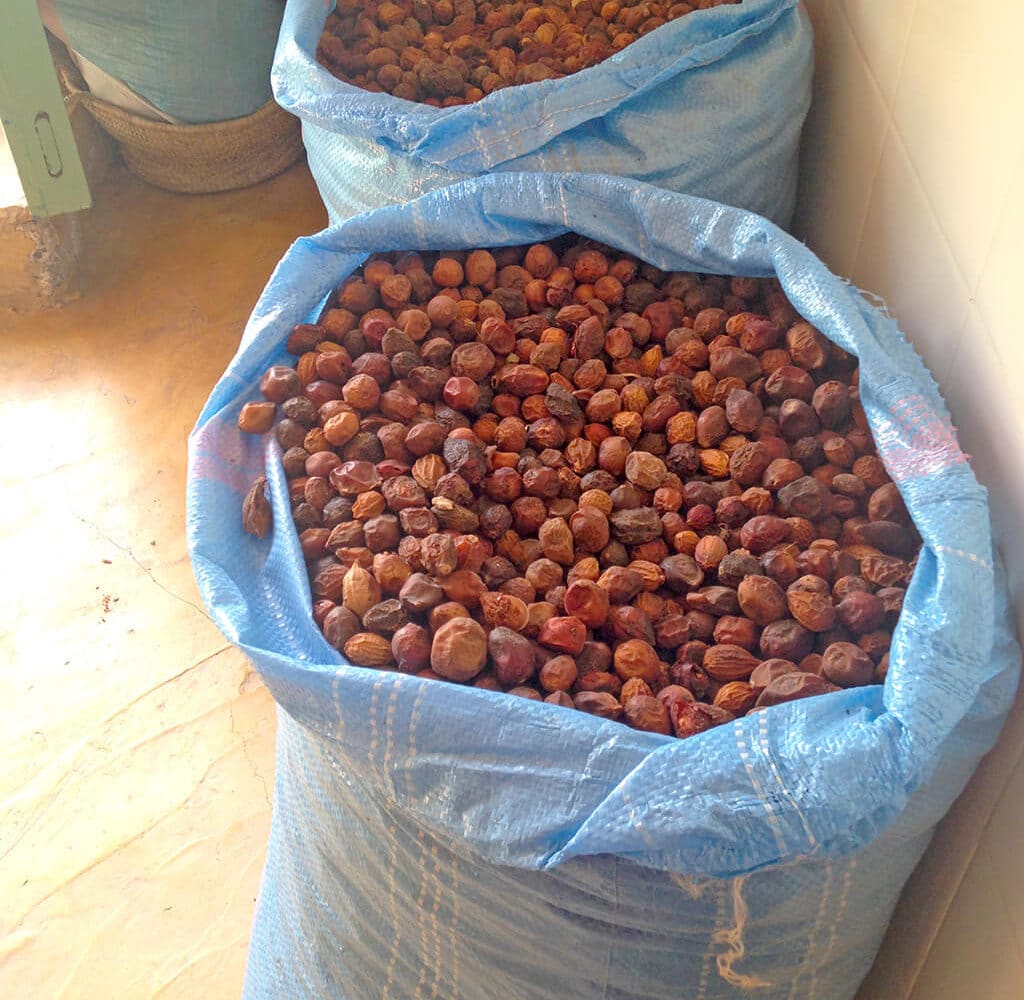 We stopped at a women’s cooperative outside Essaouira to learn about Argan oil and the process of making Argan products. The cooperative still produces Argan oil in the traditional way – grinding it with a stone quern – which takes hours to produce just a large bowlful of the precious oil! 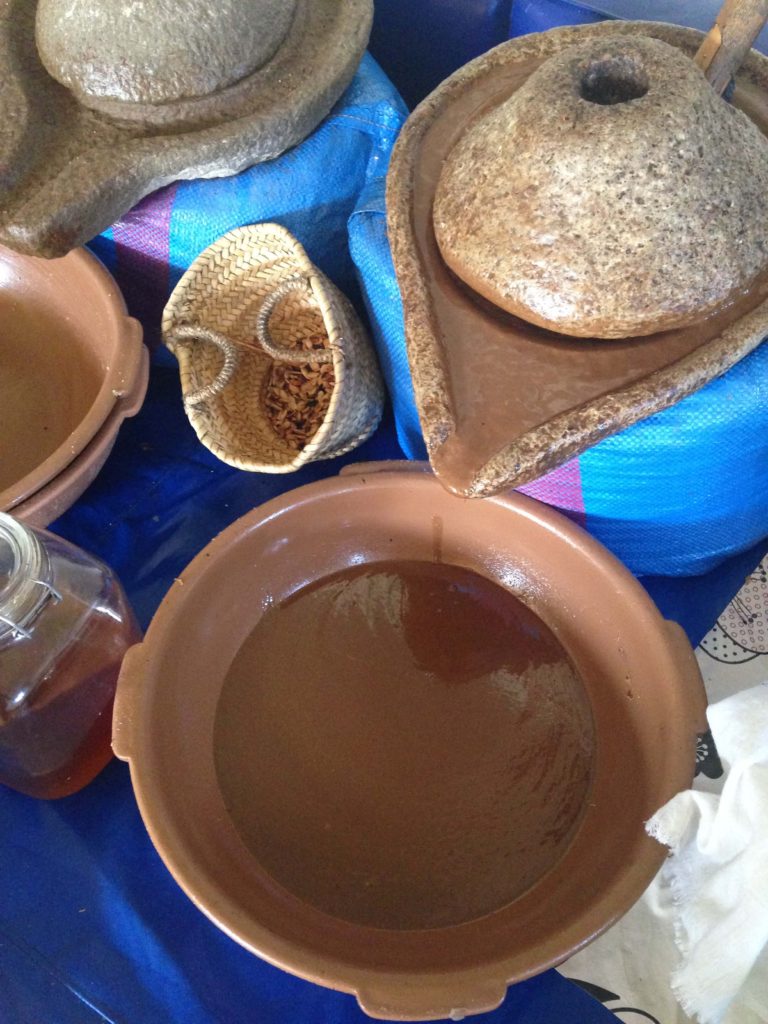 Raw nuts are used to make cosmetic products and toasted nuts are used for culinary Argan oil. The culinary oil is not meant to be cooked – it’s not a high heat oil. It’s best used in salads or anything that requires a drizzle or a dip. 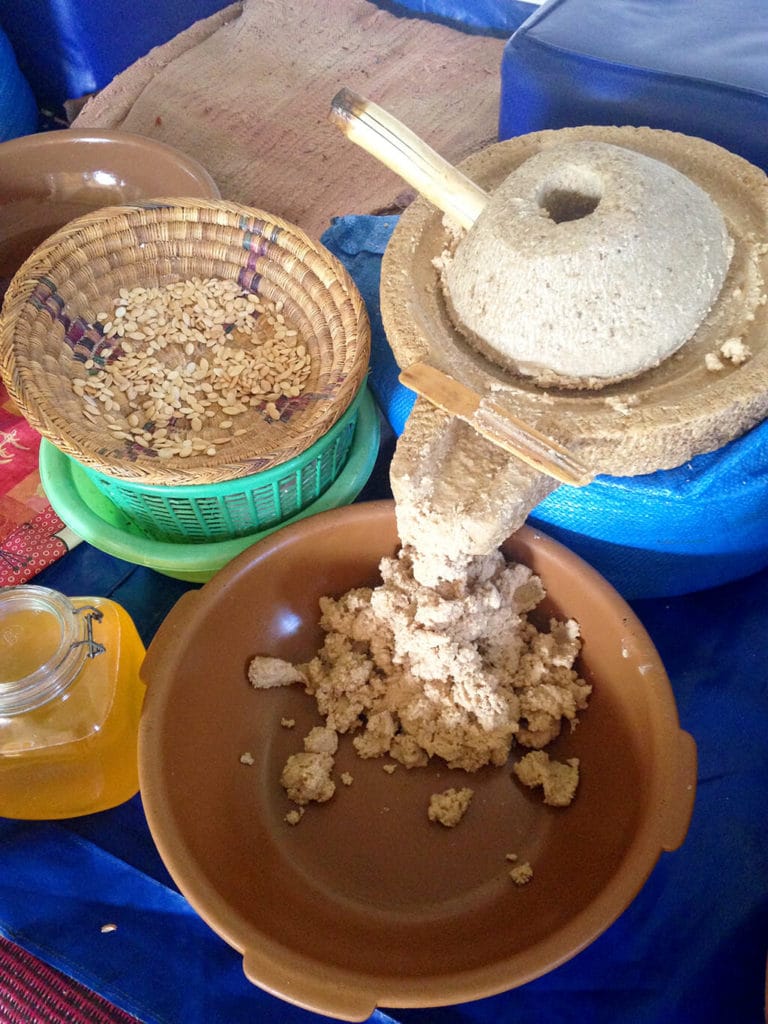 Another product made at the cooperative and found all over Morocco is amlou. The ladies at the coop called it their Moroccan nutella. It’s similar to almond butter – a blend of roasted almonds, Argan Oil, + honey. I came home with a few small jars of amlou and a bottle of argan oil. 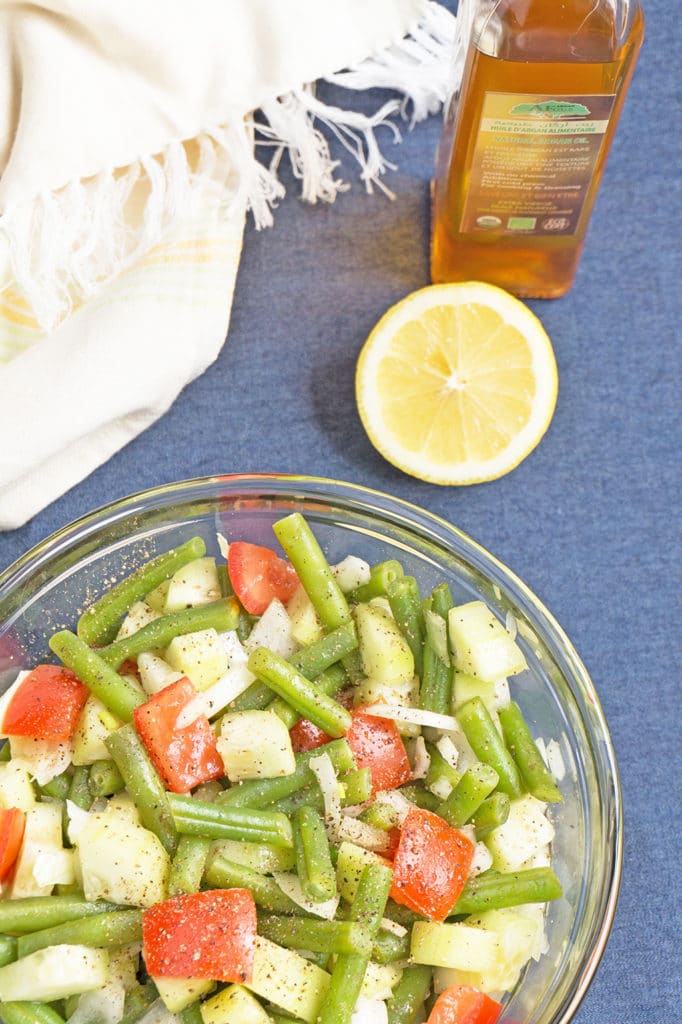 I was really excited to use my bottle of argan oil for this Simple Moroccan Salad. You can definitely use olive oil, but the argan has a great nutty flavor that makes it unique. I highly recommend it…it’s one of those flavors in a dish that you just can pinpoint what it is, but it’s delicious! It’s available here. 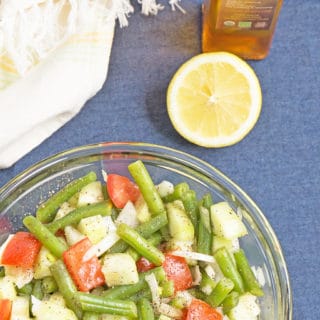 A simple salad with green beans, cucumbers and tomatoes - add a drizzle of nutty argan oil and you have a typical Moroccan side salad.

*post may contain affiliates links that help support Oat&Sesame at no cost to you.

More salad recipes for you