Follow my adventures and misadventures with this Travel Guide to Tulum, Mexico and the Yucatan Peninsula. 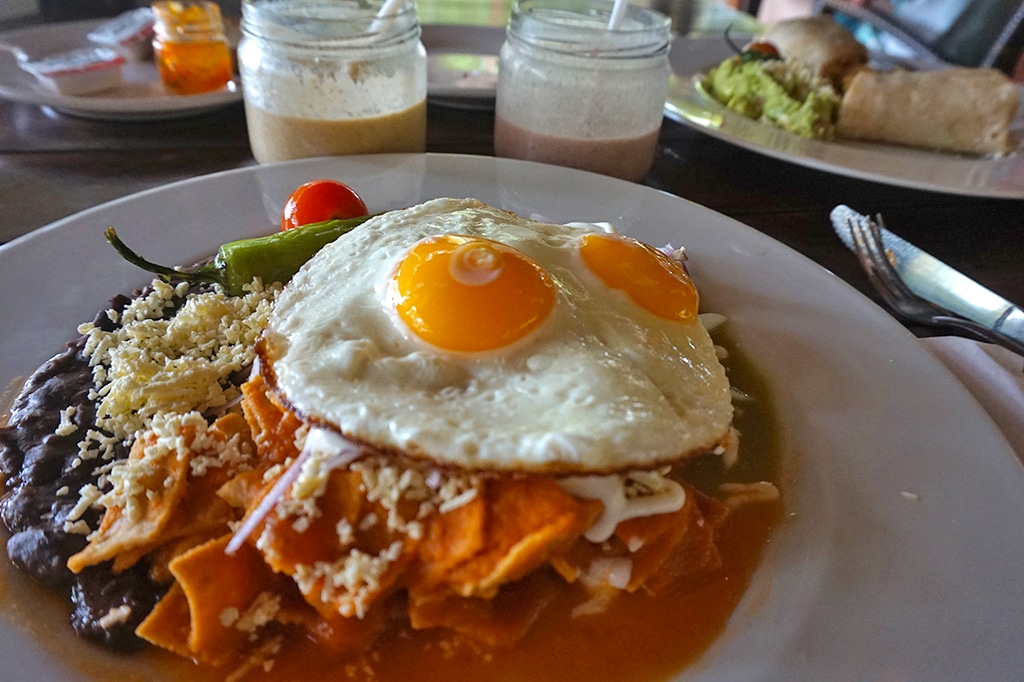 Hola chicos! I am so excited to share some of the fabulous adventures in both travel and eating on the blog today. There is so much to share I’ve decided to break it up into three parts.

A highlight of Part 1 is the cooking class where I bravely snacked on chapulines – grasshoppers from Oaxaca.

Our first three days in Mexico were cloudy and a bit rainy. Not exactly what we had hoped for in our quest to find warm sunshine in the middle of winter. But we did find these lovely mamey fruit to brighten our spirits! 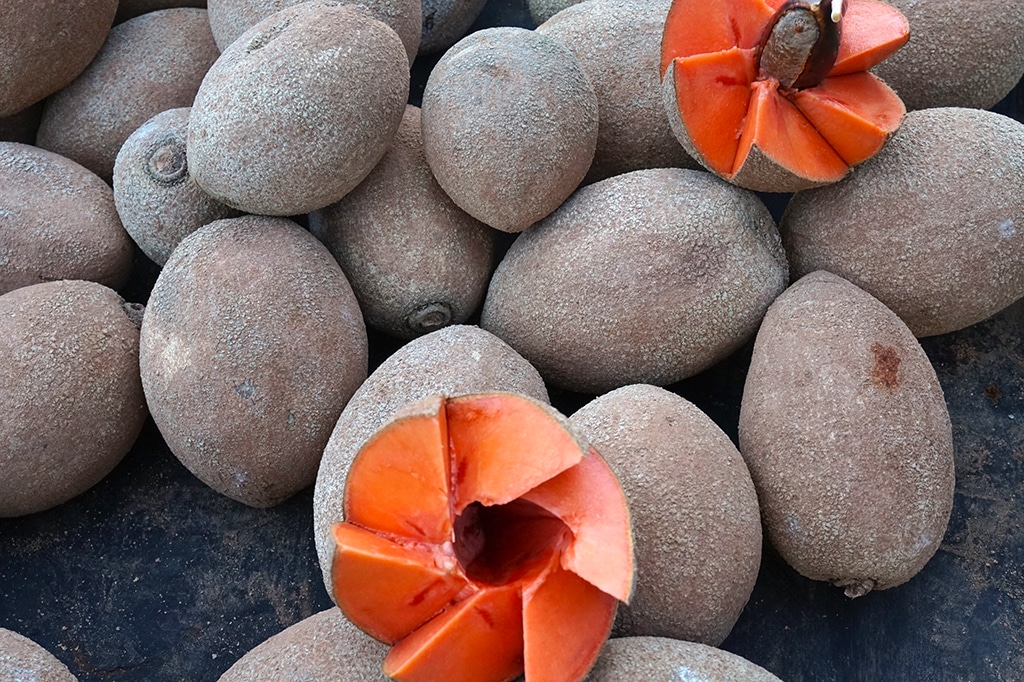 Mamey: native to tropical areas of Mexico and in season during our visit. Look for street vendors with cartfuls.

We drove straight from the Cancun airport to Tulum which is about an hour and a half down the coast. It’s past all the grand resorts, the tourist meccas and it’s just a little more subdued. The resorts are no taller than the jungle canopy and the restaurants are open air and tucked into the trees. It has a hippie vibe, yoga resorts aplenty, restaurants touting vegan menus or local farm to table fare.

We opted to stay in a neighborhood by renting an apartment through Airbnb. It was situated at the intersection of the road to the beach and the road to the town of Tulum – both really fun to explore. In town you can eat dinner for two for about $5, on the beach road you can find high-end establishments to splurge on dinner for 2 around $100 – two different worlds – as most of real Mexico versus tourist Mexico is. We spent our first afternoon and evening in town – visiting the shops and enjoying a few tacos before collapsing after a long travel day.

Our first full day in Mexico we spent exploring the ruins on the north end of Tulum. They are directly on the water and make for a perfect activity on a cloudy day. 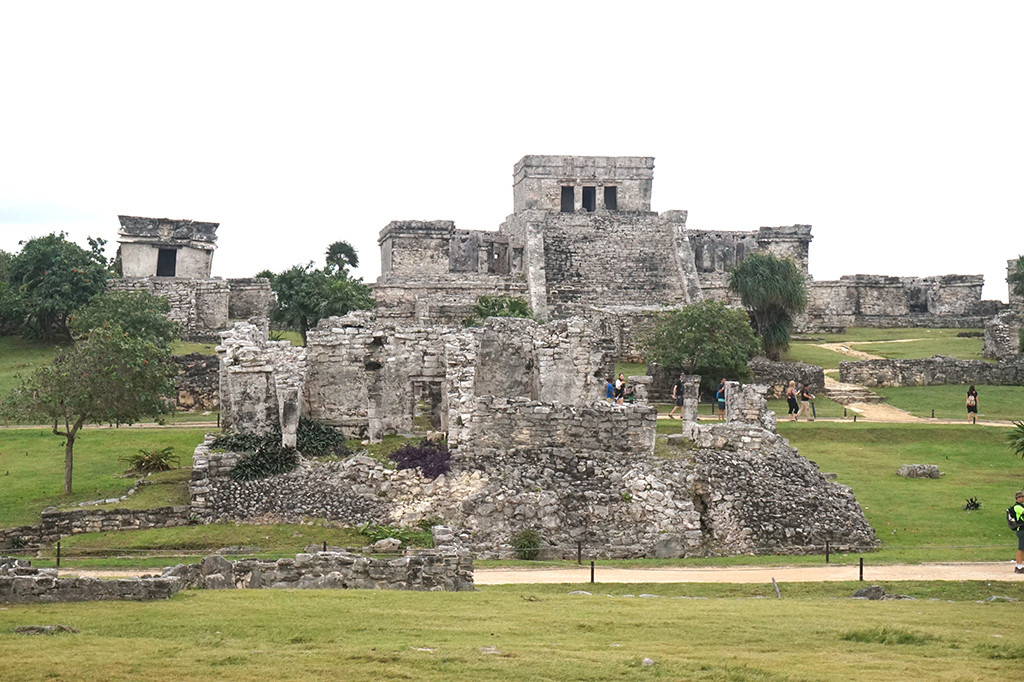 The next day didn’t improve. We had intended to visit a cenote – Mayan for freshwater sink holes – excellent for swimming. There are TONS of cenotes in all direction from Tulum.

I spent a good chunk of time figuring out which one was the best – I have a real problem committing when I’m doing internet research. I finally settled on Sac Actun based on a few web reviews I found and off we went. 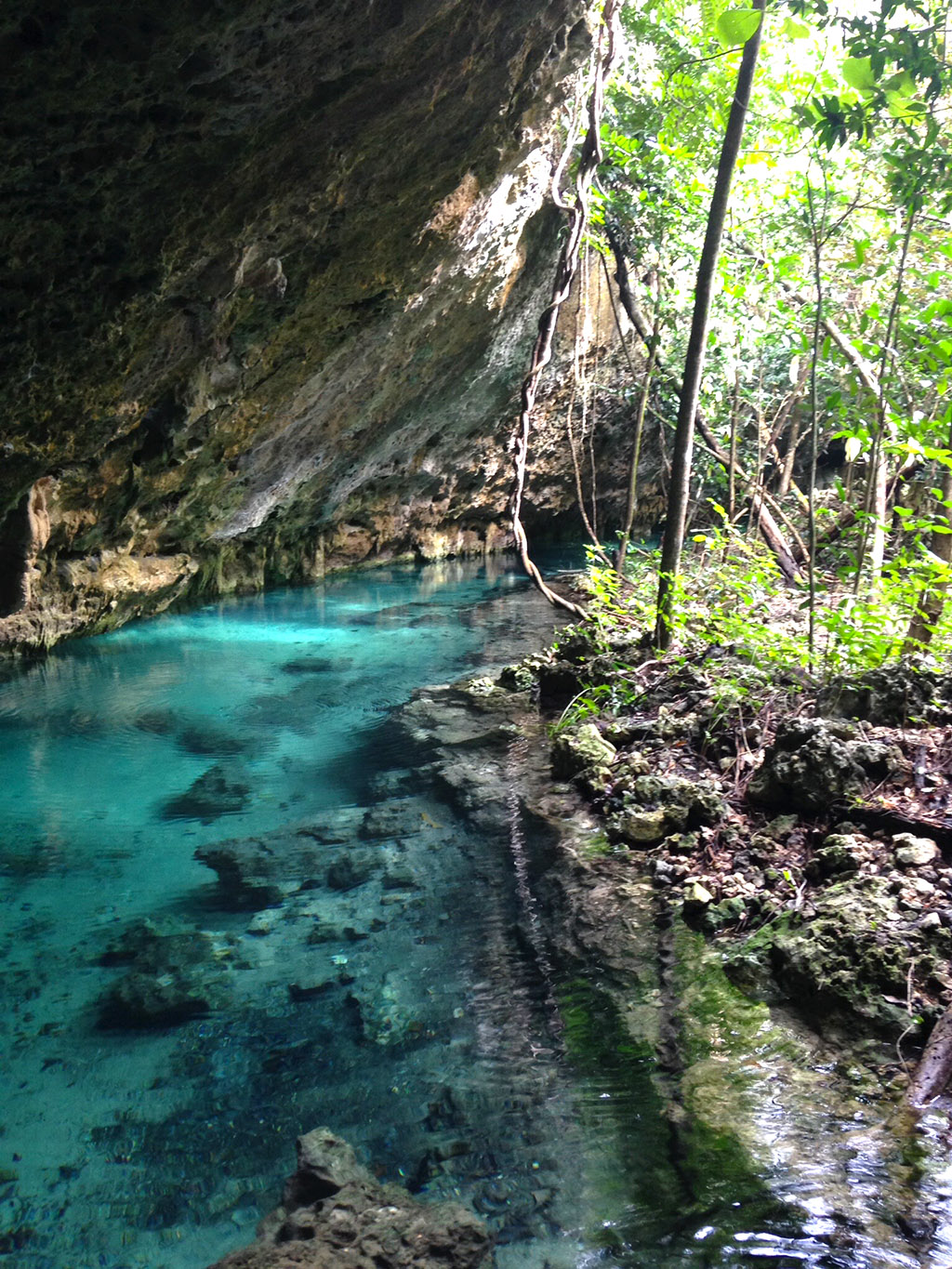 It pays to do your research when you travel. For Sac Actun you travel through a popular cenote called “Dos Ojos”. Ignoring the hand signals of the attendant waving you to park your car at Dos Ojos, give a shout that you’re headed to Sac Actun and continue down the dirt road. Another 30 minutes later you finally arrive at Sac Actun.

Sac Actun is different from other cenotes. Instead of grand open swimming holes, Sac Actun is a hidden cave and it’s about as close to spelunking as I care to ever experience.

There were several areas where the cave became a labyrinth of stalactites that left only inches of space on all sides of my head. Had I known this ahead of time, I might have been much more apprehensive. The tight spaces always led into large cavernous areas with bats darting back and forth. A perfect subterranean activity for our second cloudy day. 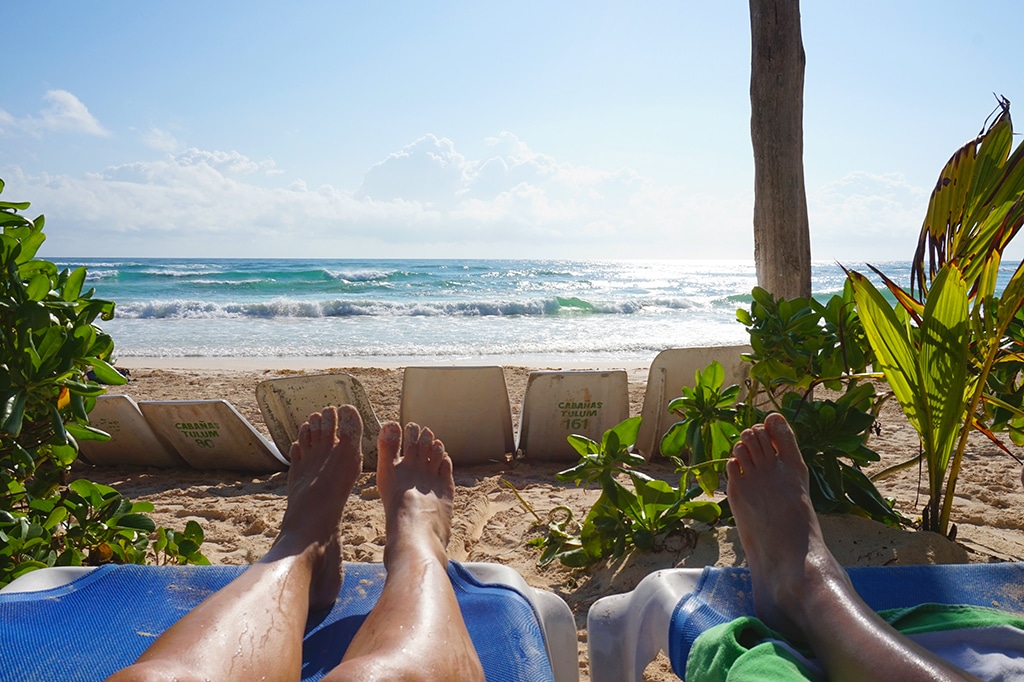 And finally our last 3 days were filled with glorious sunshine and perfect ocean waves to frolic about. We spent all three of them at Ziggy’s beach club.  You can spend the entire day on their beach chairs as long as you eat and drink from their restaurant. Once you have a margarita (or two), you won’t really want to leave anyways! I tried a local liqueur called Xtabentún – made from anise and fermented honey – blended with fresh melon. 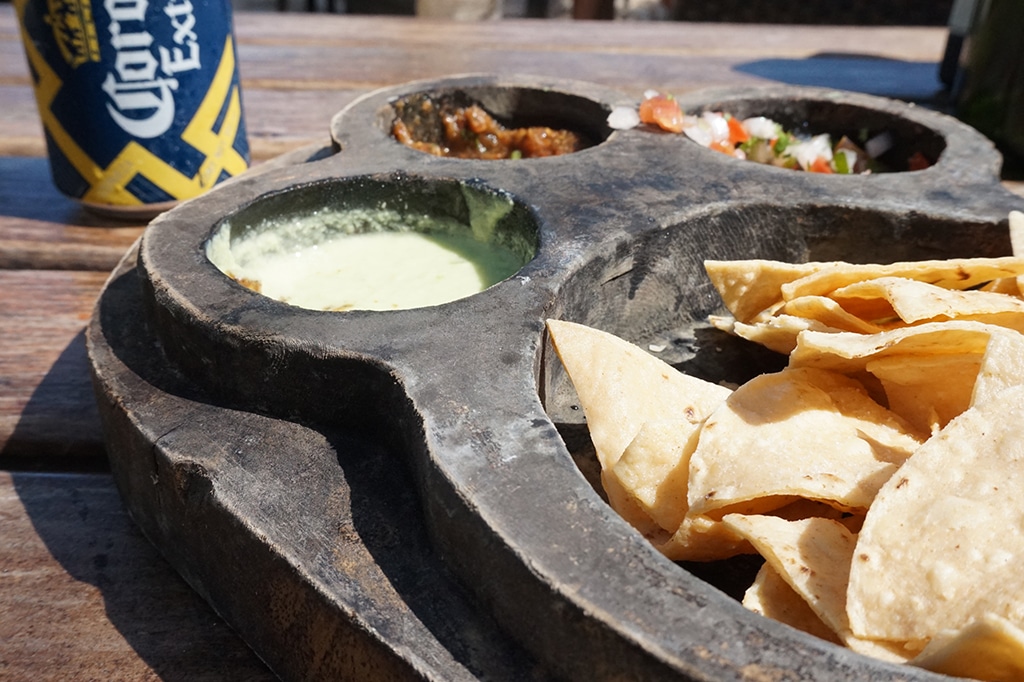 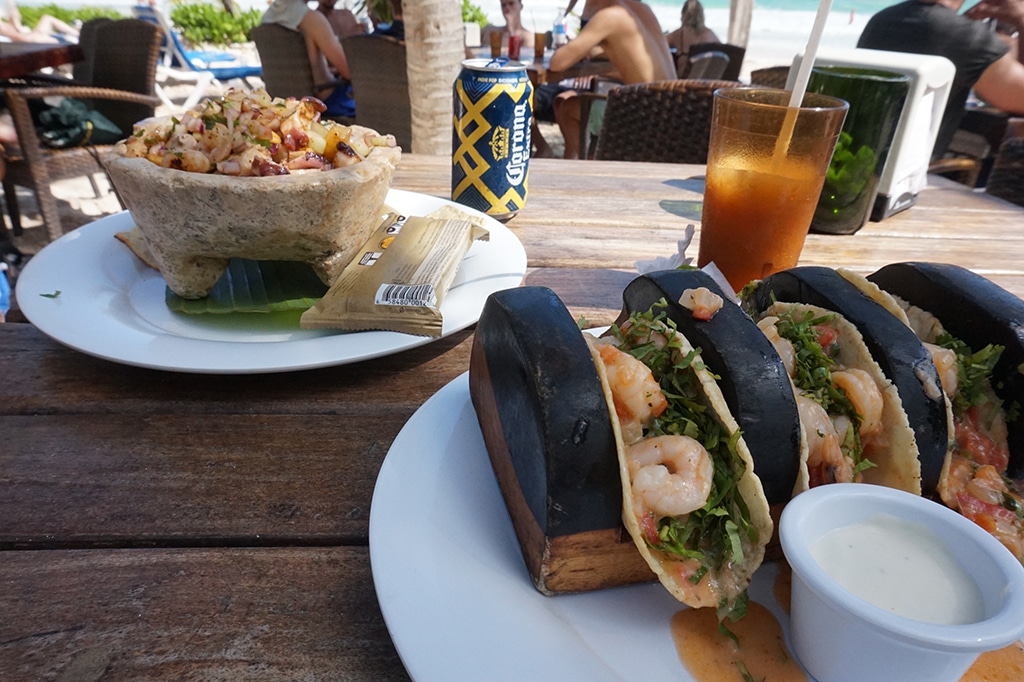 As our splurge dinner we opted to dine at Hartwood Tulum – an off-the-grid restaurant run by an ex-New Yorker husband and wife team.

I had read many articles about this restaurant and decided to dine here based on their dedication to sustainability, a zero carbon footprint, all open fire cooking, sustainable fishing methods and a commitment to locally harvested ingredients from Milpas, communal Mayan farms.

In addition they educate the Mayan community about organic farming and work to alleviate hunger in rural areas. It’s great to support individuals that approach food with mindfulness of all of the above. 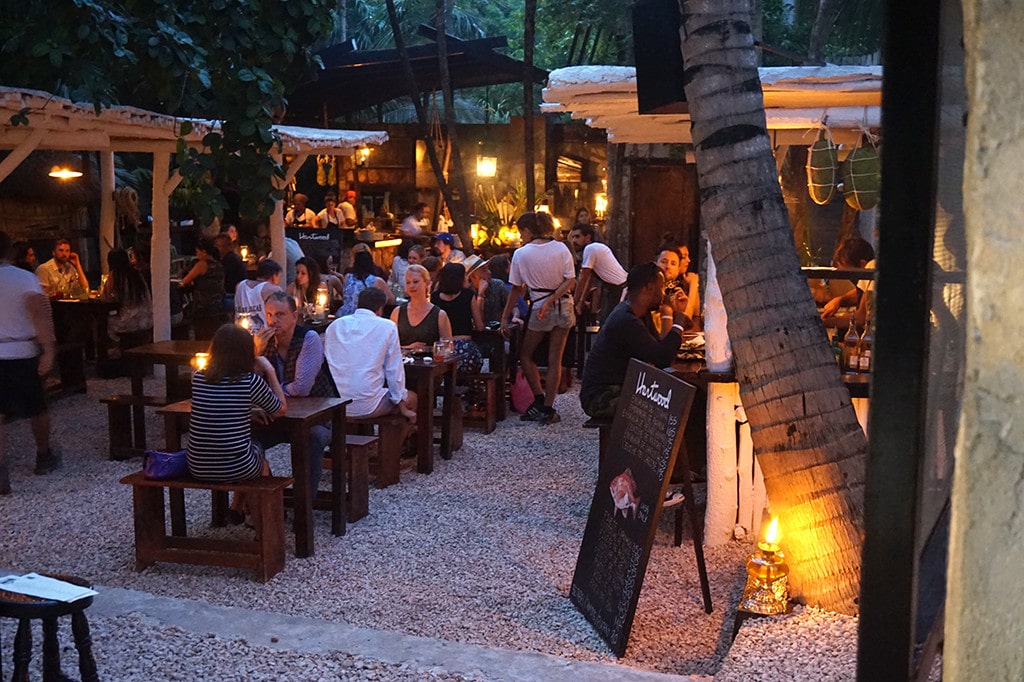 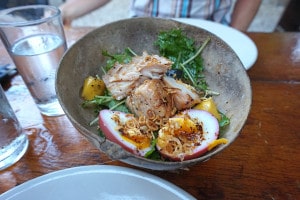 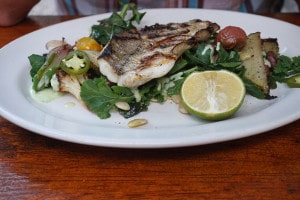 The little beans on this plate were so delicious! 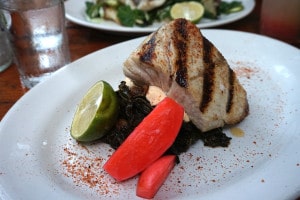 We fell in love with these greens called Chaya. 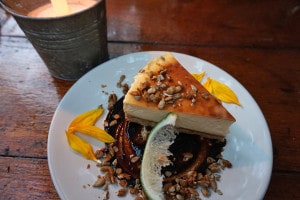 Our last day in Tulum I arranged to take a cooking class at the home of a lovely woman named Lily who operates Rivera’s Kitchen Tulum. 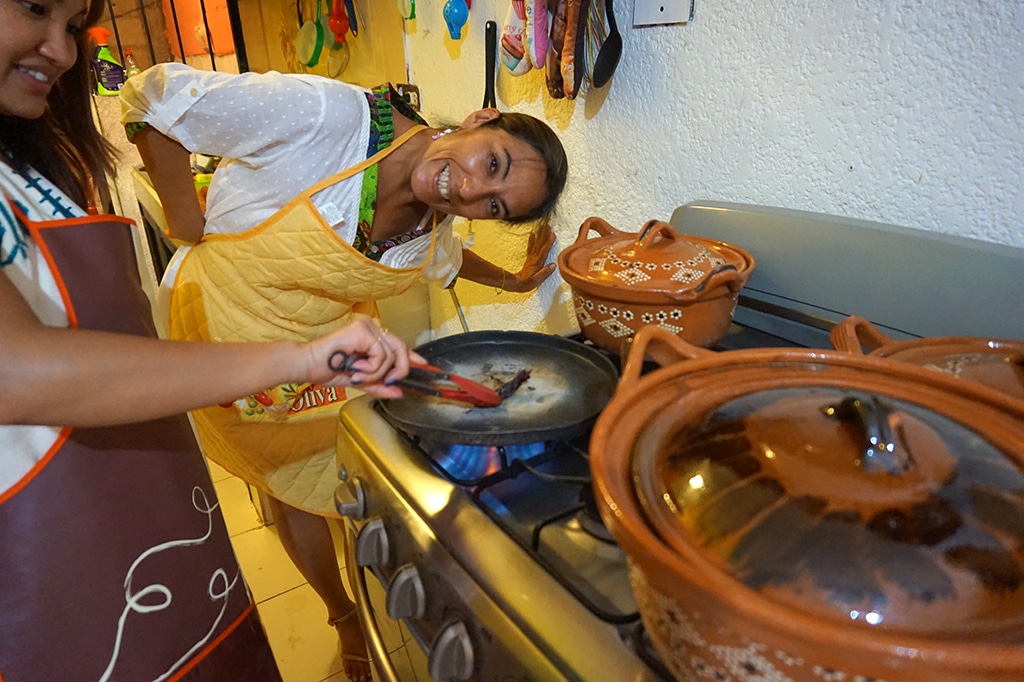 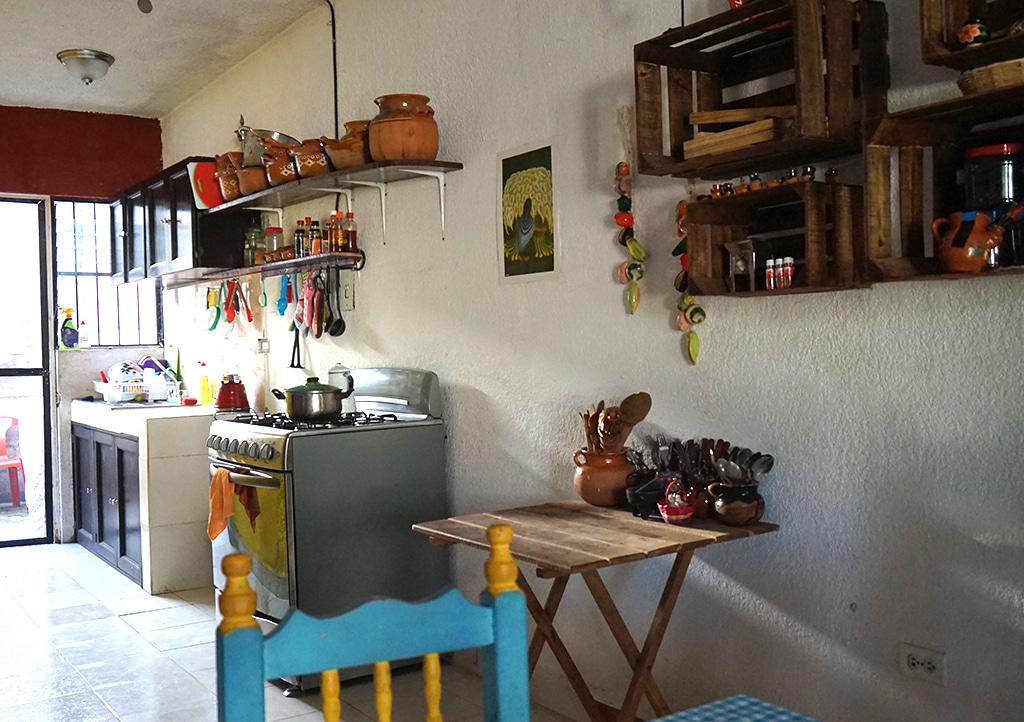 There were four of us in the class and we made black bean soup, mexican rice, fish, fresh tortillas, fresh quesadillas and a couple of different salsas. I had a blast and learned a few new tips! For example, the herb epazote is the secret flavor behind tortilla soup – I need to try it in my tortilla soup recipe and see how it changes the flavor!

I will share all the recipes with you at the end of Mexico Part III, so read on!

Lily made sure that we conformed with the Mexican motto “un taco que cierra no es un taco” – translates to “a taco that closes is not a taco.” 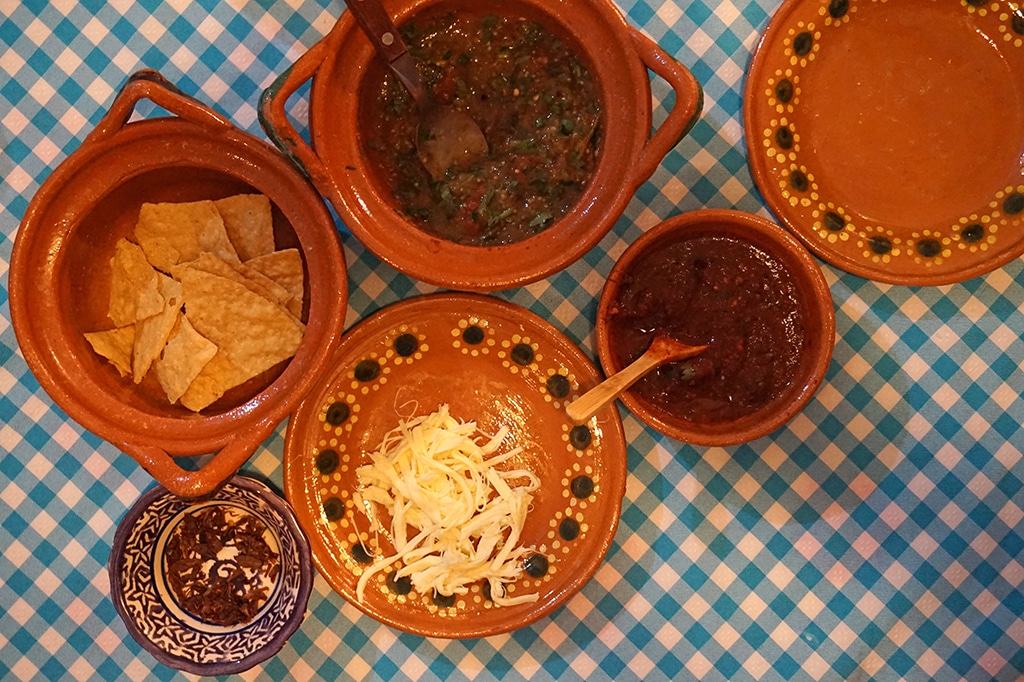 And yes, I snacked on a few grasshoppers – chapulines – they are tiny like crickets and all broken up into pieces (pictured above – bottom left). The strangest part was that they tasted like smoked pastrami. They had huge flavor for the tiniest pieces!

If you’re feeling queasy after reading this – you’re not alone – my sister nearly gagged over Facetime when I told her about these. 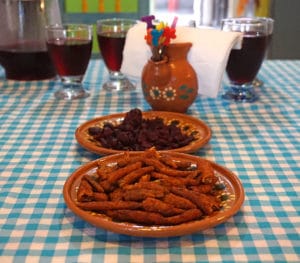 Dried cranberries tossed with salt and chili were a yummy snack. The other plate – little dried fish – boquerones. 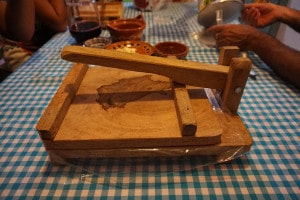 My giant tortilla press…I need to build one of these. 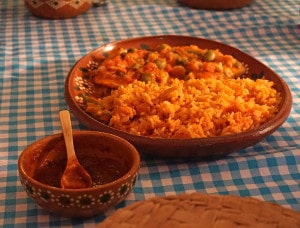 I’d like to round out Mexico Part 1 with this short story titled “A Parking Ticket in Tulum“.

If the curb is yellow and you drive a rental car, it’s not wise to park there. Gringos are the only ones who get parking tickets in Tulum and what ensues is chaos and confusion. With this said ticket, the police will also confiscate your license plate as collateral, but you will not realize this. We would have never noticed it was missing if it were not for Anna Maria, our host, who pointed this out.

A common theme in Mexico is that only women handle monetary transactions. At shops, restaurants, etc…you’ll find that when you try to pay, a woman will appear. This is also true at the police station. After three attempts to understand the working hours of the payment window/woman, we finally found it open for business and paid our fee ($17) and I proudly emerged with our plate.

However, without a screwdriver we had no way to put the plate back on the vehicle which leads me to another short story that occurred as we traversed the central part of the Yucatan, destination Merida.

…continue to the adventures in Mexico Part 2. 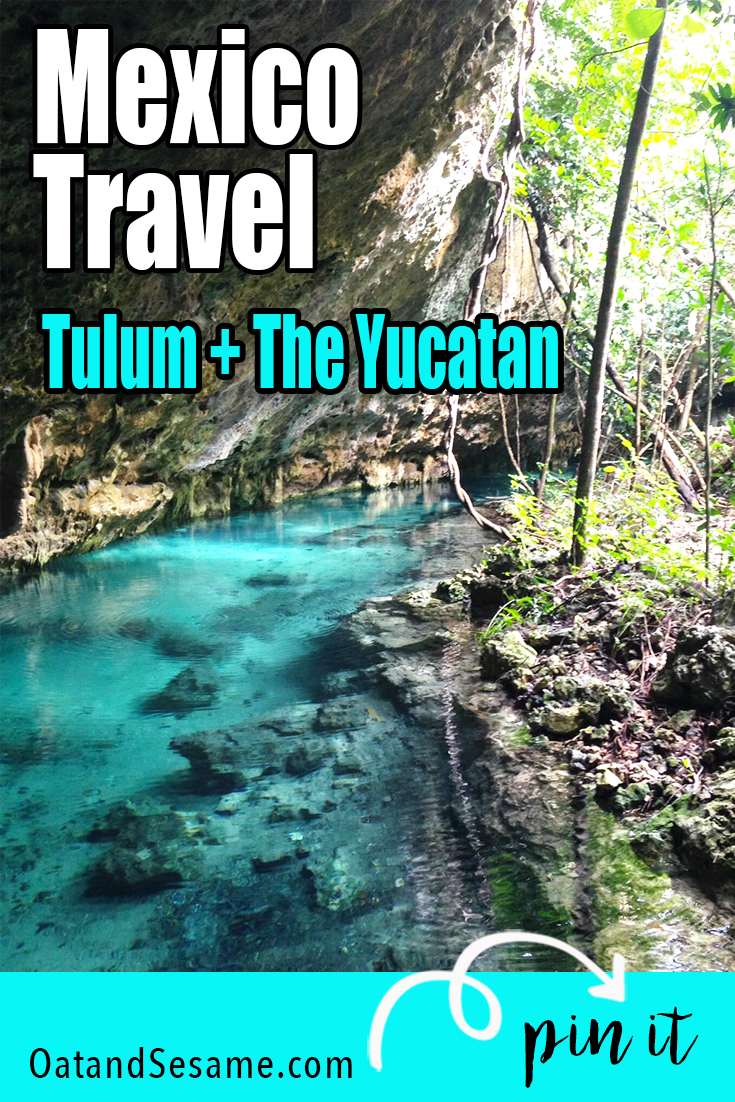